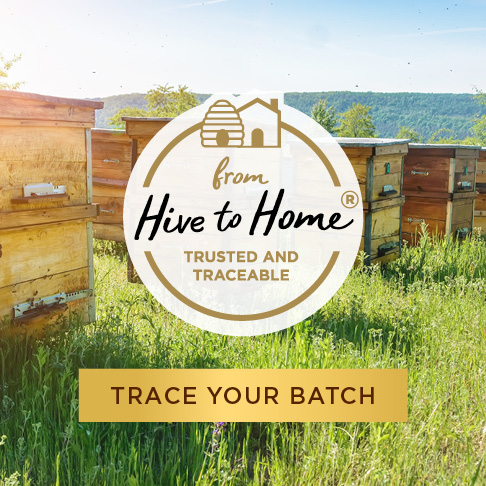 There are no reliable figures on exactly how much honey falsely labelled as Manuka is sold in the UK every year but estimates based on New Zealand export figures suggest up to half of all honey sold as "Mānuka" may not contain what it claims on the jar.

New Zealand has a ban on importing honey, so if a honey has come from New Zealand, it must have been made there. And all pots of Manuka Honey exported from New Zealand to countries like the UK must meet strict standards to prove it is made from nectar from the Mānuka bush.

The New Zealand government introduced rules in December 2017 which mean every batch of honey must be tested in an independent laboratory and shown to contain four chemical markers and one DNA marker which are unique to the Mānuka bush1.

If the honey doesn’t contain all five markers, it can’t legally be exported and labelled as “Manuka Honey” – so look for the gold “Tested Certified Mānuka” symbol on honey jars which prove it has met the requirements. 2. Was it packed in New Zealand?

One way of making sure your Manuka Honey hasn’t been tampered with before it gets to the shelf in the UK is to only buy honey marked “packed in New Zealand”. This means it has been sealed into a jar before leaving New Zealand, keeping it safe from adulteration. Manuka Honey is most at risk of being diluted with cheaper honeys, sugar syrup or even added chemicals, when drums of genuine, certified New Zealand Manuka Honey get processed by third parties overseas. You can avoid this by looking for the “packed in New Zealand” promise.

3. What is its MGO rating – and where has it been tested?

Manuka Honey contains a natural compound called methylglyoxal – or MGO – which has antibacterial properties2. The MGO rating number shows the amount of MGO in the honey, which is a sign of how active or strong these properties are3. There are other systems of measuring Manuka Honey strength, which can be confusing, but the general rule is that the bigger the number, the higher the strength. For added confidence when buying in the UK, look for suppliers which test their honey in an independent laboratory both in New Zealand and on arrival in the UK. Jars will state they have been tested or validated “in New Zealand and the UK”.

Some honey jars are designed to look like Manuka Honey when they are not the genuine product but by reading the label carefully you can work out whether or not it is the real deal. Don’t be confused by statements that a honey is “100% pure” or “100% New Zealand honey” as this does not guarantee it is a genuine Manuka Honey product. An authentic New Zealand Manuka Honey will always state whether it is “monofloral” or “multifloral” – these are two official definitions of Manuka Honey set by the New Zealand Government. “Monofloral” means the honey has been primarily made from Mānuka nectar, while “multifloral” means it has been made from a mix of Mānuka nectar and other nectars. If a honey does not state whether it is “monofloral” or “multifloral” and states it is a “blend” or has been “blended”, it is highly likely it has been mixed with cheaper European or Asian honey and is not a genuine New Zealand Manuka Honey product. Although this is legal, so long as the blend is declared on the label, it means the honey could contain very little MGO - the natural compound which gives Manuka Honey its special properties.

Reputable honey sellers can trace any jar of honey back to the beekeeper who harvested it because they keep records of exactly which drums of honey go into every batch they sell. When buying Manuka Honey, check that the packaging promises traceability from “hive to home” – if it doesn’t, you can’t be confident you know it’s come from a hive of real New Zealand Manuka Honey. More info
Article References
Catch up on the latest news